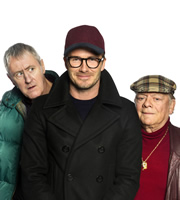 Del and Rodney are desperately trying to flog some David Beckham-branded designer mens' underwear down at the market. Unfortunately, David's not being much help.
Preview clip

This sketch was filmed at Wimbledon Studios in January 2014. A 2-and-a-half minute 'behind the scenes' feature was broadcast on BBC Two circa 10:15pm. You can read more about the background to this sketch via this news story

David Beckham in Only Fools And Horses - Trailer

A very brief trailer for the new Only Fools And Horses sketch.