Never Mind The Buzzcocks is being revived by Sky, British Comedy Guide can reveal.

The music-focused panel show originally aired on BBC Two for 28 series between 1996 and 2015, when it was cancelled in order to "create space for new entertainment formats".

The first 17 series were hosted by Mark Lamarr, followed by Simon Amstell, then later by a number of guest presenters, before Rhod Gilbert chaired the final series. Phill Jupitus was a team captain for the entirety of its 18-year broadcast, facing off against Sean Hughes, Bill Bailey and Noel Fielding.

Details of the new panellists and host have yet to be confirmed, but at the weekend Paul Chowdhry posted on Instagram a now-deleted photo of himself on set at Riverside Studios with rapper Dizzee Rascal. BCG understands that there have also been changes to the show's format.

As was the original, the revival is being made by Talkback Productions, after the show's erstwhile producer, Kate Edmunds, joined the comedy-centric company permanently in July as its new director of programmes.

Sky One aired a similar music panel show, Bring The Noise, in 2015, featuring Katherine Ryan and Joel Dommett as regular guests, with Kaiser Chiefs' singer Ricky Wilson hosting and Nicole Scherzinger and Tinie Tempah as team captains. However, it was cancelled after a single series due to poor ratings.

The channel has committed to the panel show format in recent years, with There's Something About Movies, fronted by Alan Carr, to return for a third series, and the sport-themed A League Of Their Own currently broadcasting its fifteenth run.

Meanwhile, Amstell has also recently piloted a new Sky comedy, reuniting him with Tiger Aspect, the production company that made his BBC Two sitcom Grandma's House.

A teaser for the show, Get Happy, was filmed last year. If picked up for a series, would mark Amstell's debut as a director of episodic television after making Carnage - Swallowing The Past for iPlayer and the feature Benjamin.

Lamarr has also recently made his return to comedy, 15 years after leaving Buzzcocks, appearing as a broth magnate in the current series of Phil Ellis Is Trying on Radio 4. 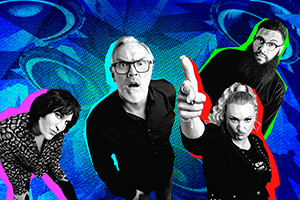