Guest-hosted by Jack Whitehall. Gwendoline Christie talks about Game Of Thrones; Luke Evans says he had a 'pinch me' moment with Jennifer Anniston; Peter Crouch has a cheeky response for Prince Harry; David Walliams jokes about Simon Cowell; and Sam Fender performs live in the studio.
Preview clips 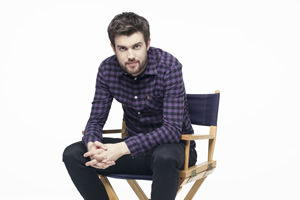 Gwendoline, asked about saying goodbye to Game Of Thrones, says: "I have been telling myself for years that it will end and that I have to be prepared to let go. When it came to the final episode, I got through it and I felt fine all day. But, when it came to the speeches, I finally went to pieces and couldn't stop crying for two hours. People got bored with me in the end, but I got it out of my system."

Asked if she can talk about what happens in the end, she gives an emphatic, "No."

Talking about appearing as Titania in the latest stage version of A Midsummer Night's Dream, she says, "Interestingly, the projects I tend to be involved with come with a heavy cloak of secrecy, so you would assume that this being Shakespeare that I would be able to tell you everything about the production, but yet again, I cannot tell you anything about it because there are some surprises involved." Adding, "In a world full of darkness, this production has much needed joy.

Asked if she is excited to back on the stage, she says, "It is terrifying, but I wanted the opportunity to be part of a company and this one has so much energy. I am very different to how I may have been seen before, the armour may be off."

Luke, talking about his new Netflix film, Murder Mystery, says: "It was fun and a very enjoyable job to have. It was a great summer and I had a really easy schedule so spent most of the time in a hotel on Lake Como - I've never had so many people visit me on set!"

Talking about his co-star Jennifer Anniston, he says, "She kindly invited me to dinner at her house and being a little star struck I couldn't believe it when Lisa Kudrow walked in. I was trying to play it cool, but Lisa sat one side of me and Jennifer on the other and I had one of those 'pinch me' moments and thought, 'Wow, I am sitting in between Phoebe and Rachel.'"

Peter, talking about his new book, How to Be a Footballer, says: "It's me taking the mickey out of myself about some of the mistakes I have made, it gives an insight into football and the experiences I have had. It's been a great journey."

Asked about his famously funny answer 'A virgin!' to the question, 'What would you be if you weren't a footballer?' he says, "It had been a really long day of interviews and I had been asked the same questions over and over again, so I thought I would have a bit of fun. 10 years on and people are still talking about it!"

Talking about his encounter last year with Prince Harry, who cheekily asked him, 'How did you bag Abbey?' Peter said, "That was pre-Meghan and I didn't know how to respond, but now I could come back to him with the same question!"

David, talking about his latest children's books, says, "I am super pleased they have done so well - it is the biggest thing I have ever done."

Asked if Simon Cowell is pleased for him, David says jokingly, "Simon hates it and keeps coming up with terrible story ideas that he says I can write, and we can then split the profits 50/50."

Sam performs live Hypersonic Missiles in the studio, before joining Jack for a chat.

Paloma Faith was originally billed to appear on this episode. Jack Whitehall hosted this episode as Norton was busy with Eurovision preparations. Details

What was that waiter doing?!

Jack Whitehall versus the red chair

Jack Whitehall gets called out by an audience member.