The Scarlet Pimpernel is at the height of his activities sneaking aristocrats out of revolutionary France, and Blackadder is not too pleased at the sudden overrunning of London with the objectionable garlic-munchers. He decides to prove the Pimpernel's actions as overrated by rescuing an aristo himself - or not... 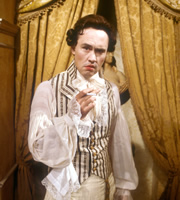 The Scarlet Pimpernel is the talk of London, much to Edmund's chagrin. He is set upon by French revolutionaries and held captive.