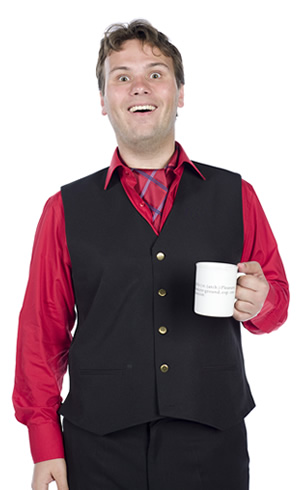 John Finnemore has been revealed as the big winner at the Comedy.co.uk Awards 2014, picking up three prizes.

The Awards, now in their ninth year, are unique in the British comedy industry, being decided upon entirely by a large-scale open public vote, with no shortlist, judge or jury of any form.

Finnemore is the writer of hit Radio 4 sitcom Cabin Pressure, in which he also co-stars as the dim-witted Arthur (pictured). Featuring Stephanie Cole, Benedict Cumberbatch and Roger Allam, the series was voted both Best British Radio Sitcom and selected ahead of 386 other programmes by comedy fans as the single best Comedy Of The Year.

The wins confirm Finnemore's place as the Comedy.co.uk Awards' most successful comedy writer, having won - or with contributions to programmes such as That Mitchell & Webb Sound, shared in - more than a dozen accolades since the Awards' 2006 inception.

Commenting on his trio of wins this year, John Finnemore says: "I am absolutely delighted and astonished by this. As I gather there is no awards ceremony, I plan to spend today sitting in my flat wearing a bow tie with my pyjamas, drinking warm white wine, and presenting myself with trophies I've carved out of soap. 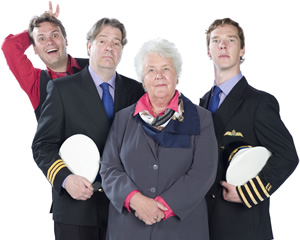 "As I do so, I shall be thanking David Tyler, producer of Cabin Pressure; Ed Morrish, producer of Souvenir Programme; the superb casts of both shows; Caroline Raphael and Jane Berthoud at Radio 4, and of course Comedy.co.uk.

"I am particularly pleased and proud that a radio show has won the Comedy Of The Year category... but in fairness, you have to remember that Dan Tetsell, who plays Karl the ATC guy, was in Hollyoaks for a while, so no doubt we picked up a lot of extra votes from his fans."

The full 2014 results mark a clean sweep for the BBC, with not a single of the 'Best' comedy accolades going to another broadcaster. Other high-profile winners include Detectorists, which picked up the award for Best New British TV Sitcom; and Would I Lie To You?, which triumphed in the very competitive TV panel show category.

Dapper Laughs: On The Pull, the controversial ITV2 show starring Daniel O'Reilly, was the programme that polled the most negative votes.

To find out more about the awards, and for further comment on the winners and find out which TV shows which picked up the most negative votes see: