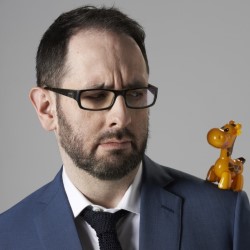 'Hilarious ... a wonderful set of stand-up vignettes' (Guardian). 'His phrasing is joyous and choice of words close to poetic ... tales of hilarious woe' (Metro). 'A lovely, friendly, thoroughly entertaining show' (Chortle.co.uk). The best-educated third of beloved Fringe losers We Are Klang, and one of the main writers on Russell Howard's Good News, Steve has opened for Russell Howard and Lee Mack on tour, and was the first ever stand-up guest on Good News. He is a regular on Frank Skinner's Absolute Radio show where he is usually quite good.

The best-educated third of beloved Fringe losers, We Are Klang, and one of the main writers on Russell Howard's Good News, Steve Hall's latest solo Fringe show is not about zebras.

In accepting the chaos of life, and inviting it in for a cup of tea, Steve takes us on a journey around (but not through) parenthood and how it feels to look back on life wearing child-shaped spectacles.

Among the flotsam and jetsam of Steve's 38 years, he describes what it was like to grow up in the 'media burb' of Borehamwood. The town's relationship with the film and television industry had a surprising and magical effect on him. But even the magic of yore - captured in the show through childhood photos, paintings and even clothing - is tempered by unforeseen mishaps.

A finalist in the BBC New Comedy Award and The Daily Telegraph Open Mic Award, Steve Hall made his Fringe debut in 2003 in the sell out Edinburgh show, Three Men And A Giant. Steve then became known to Fringe audiences as one-third of celebrated sketch troupe We Are Klang (nominated both for an Edinburgh Comedy Award and a Barry Award), and has now brought three solo shows to the Edinburgh Fringe (also including Vice Captain Loser and Steve Hall's Very Still Life).

Other live work has included opening for Bill Burr, Lee Mack and for Russell Howard on a whopping 250 occasions, including at Hammersmith Apollo, Wembley Arena and The 02 Arena. Steve was the first ever stand-up guest on Russell Howard's Good News (BBC Three), subsequently writing for the series for four seasons, with work on a fifth to start soon. Steve also directed the Edinburgh Comedy award-nominated show from Pappy's Fun Club (now Pappy's).

Steve is a regular on Frank Skinner's Absolute Radio show, where he is usually quite good, and has recently appeared as a panellist on The Rest is History for BBC Radio 4. Meanwhile his writing credits include A League Of Their Own, The Now Show, Marcel Lucont's BBC pilot, various comics on Mock The Week, including several series for Chris Addison.