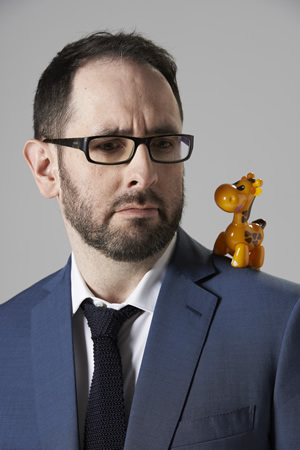 Steve Hall is back performing stand-up after a few years away. Time to catch up with him...

I've had a splendid time since first giving it a crack in 2002. I was runner-up to Rhod Gilbert in the 2003 BBC New Act Competition and we were doing a show together that same year. I did 4 Edinburgh shows as We Are Klang with the obese Greg Davies and the psychopathic Marek Larwood. We had a TV show. We have a live DVD that might get released one day.

I've written for several series of Russell Howard's Good News, and opened for him on tour about 250 times, including at the 02 and Wembley Arena twice. I'm in three seconds of a pop video starring the pedantic comedian Daniel Kitson, and occasionally fill in on Frank Skinner's Absolute Radio show. Looking back on all that, I'm pretty damn happy.

Ooh, very Jim Carrey. It's a happy show featuring knitting, photographs, and some truly sensational paintings that will sear themselves into your retinas.

Having spent a lot of time writing on some telly programmes, this is a return to stand-up. I haven't done Edinburgh for four years, and I've really missed it.

I'm on 5 minutes after Alun Cochrane starts 100 yards down the road. When he sells out, I'll snaffle his cast offs. 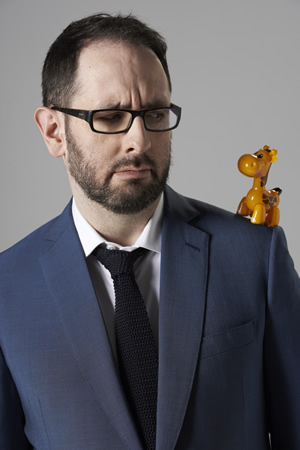 Have Avalanche Records found a new site? If they have it could get ugly.

Anything that Don't Be Lonely are producing.

Myself. I'm a boring old twat.