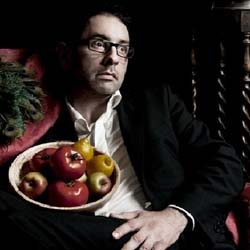 A show about achieving things, if I can be bothered to write it. We Are Klang man and Russell Howard tour support. Adecco Alfred Marks Borehamwood Branch June 1997 Temp of the Month Nominee. 'The most intelligent stand-up you've never heard of' (GQ), 'His phrasing is joyous and choice of words close to poetic' (Metro), 'Deadpan brilliance' (Time Out), 'Wonderfully misanthropic' (Sunday Times), 'Russell Howard's fine tour support' (Times), 'A lovely, friendly, thoroughly entertaining show' (Chortle).

Edinburgh Comedy Award Nominee Steve Hall returns to the Fringe with Steve Hall's Very Still Life. It's a festival that has treated him well: he was part of five critically acclaimed shows, four with We Are Klang and his 2008 debut solo show Vice-Captain Loser. He also directed the Edinburgh Comedy Award nominated 2007 show Pappy's Fun Club back when they were still a quartet.

Following We Are Klang's escapades in their BBC Three series, Steve had hoped to return to Edinburgh last year. However, his new wife's visa was refused (no, he did not buy her on the internet) and she was not allowed into the country. The financial ruination that ensued, coupled with the heartache of a lengthy enforced separation, scuppered that plan. Now he returns with a show about achievement, love and filling in immigration forms correctly.

As a solo stand-up, Steve has supported Lee Mack on tour and was Russell Howard's support both comedically and emotionally on four of his national tours. Steve accompanied Russell from the early days of playing tiny arts centres, all the way up to the enormodomes, including playing Wembley Arena twice.

Steve was the first ever guest stand-up on Russell Howard's Good News and appeared in the first series of BBC Radio 4's acclaimed My Teenage Diary and Act Your Age. He has written for The Now Show and for Russell Howard on Mock The Week.

The supposedly clever third of We Are Klang (damning with the faintest of praise), Steve has been an integral part of the pioneering Bright Club, which explores the link between education and comedy, encouraging lecturers and PhD students to talk about their fields of expertise in a stand-up environment. From its origins in a small pub, sell-out shows at the Bloomsbury Theatre have followed, along with a popular podcast and spin-off Bright Clubs across the globe.

A former BBC New Act of the Year Runner-up, Steve mixes an eloquent intelligence with self-mocking stupidity, storytelling with proper jokes. He very much hopes that relating the saga of getting his wife into the United Kingdom won't lead to her being kicked out again.