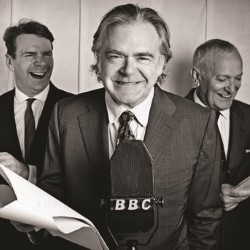 BBC Radio 4's smash hit - live! Hancock's Half Hour, lovingly recreated with a stellar cast led by Kevin McNally as The Lad Himself. The classic radio comedy starring Hancock, Kenneth Williams and Sid James ran 102 episodes. But 20 are missing from the BBC archives, and haven't been heard since the 1950s. Last summer five episodes were re-recorded by the BBC and now Neil Pearson directs another four. The Winter Holiday and New Year Resolutions form Show A.
For Show B - Prime Minister Hancock and The Three Sons see: http://www.comedy.co.uk/fringe/2015/missing_hancocks_b/

There were 102 episodes of Hancock's Half Hour - but 20 recordings are missing from the BBC archives. Actor and antiquarian book dealer Neil Pearson rediscovered the scripts of the missing episodes, and last year re-recorded five of them for BBC Radio 4. The shows were one of the hits of the BBC's Autumn season. Now four more missing episodes, unheard since their original broadcast, will be performed live at the Edinburgh Festival Fringe.

Hancock's Half Hour was written by the best comedy writing partnership Britain has ever produced: Ray Galton and Alan Simpson. The show was one of the most popular BBC radio comedies of the 1950s, and made stars of its cast: Tony Hancock, Sid James, Bill Kerr, Andree Melly, and Kenneth Williams. Last year, producer Neil Pearson's rare book business acquired the archive of a freelance comedy writer, and among the many scripts it contained were a number of original typescripts of Hancock's Half Hour, studio copies which had been used during the making of the shows. On discovering that many were for episodes whose recordings had been lost, Pearson secured permission from the authors to re-record them, and then assembled a superb cast able to do justice to this much-loved series.

The new recordings were broadcast in October and November 2014, and met with great acclaim from audiences and critics alike. A second series will be recorded for BBC Radio 4 this summer, for transmission later in the year. But before that, the magic of Hancock's Half Hour will be recreated live on stage in Edinburgh. A microphone. A spotlight. Four comedy half-hours, written by the masters of the genre, unheard in sixty years but as fresh as the day they were written, and performed by a superb cast led by Kevin McNally, whose eerily accurate Hancock has had the critics reaching for superlatives.

• Kevin McNally is best known for his role of Gibbs in all the Pirates of the Caribbean movies and has had great success in film, TV and on stage across the years. Recent credits include US TV series Turn for AMC, Supernatural and CSI. Recent theatre includes Dance of Death, Hay Fever, Ivanov, and Boeing Boeing.
• Simon Greenall is an English actor, writer, producer, and voice artist, best known for his role as Michael in the TV series I'm Alan Partridge and the subsequent film. Recent credits include Cardinal Burns and Drifters (Channel 4). He is also the voices of Alexander and Sergei in the Compare the Market Meerkat adverts.
• Susy Kane's career spans film, theatre, TV and radio, including appearances in The IT Crowd (Channel 4), The Thick of It (BBC), A Young Doctor's Notebook (Sky Arts), Little Shop of Horrors (Pleasance), Woyzeck (Royal Lyceum, Edinburgh) and the award winning BBC Radio 4 series Bleak Expectations.
• Alex Lowe is an actor, writer and comedian whose career has included diverse roles from series drama to character comedy such as Chernobyl (BBC), Midsummer Murders (ITV), The Thick of It (BBC), Peter Kay's Phoenix Nights (as Clinton Baptiste, Channel 4) and Kenneth Branagh's Much Ado About Nothing. He is also the man behind Radio 2's comic creation Barry from Watford.
• Robin Sebastian has appeared in Catastrophe (Channel 4), Sherlock, Doctors, My Family, and Spooks (all BBC1), as well as Twice Ken is Plenty, Cosmic Quest and The Rose and the Ring for BBC Radio 4. His theatre credits include Fallen Angels (Bill Kenwright Ltd, UK No 1 Tour), Volcano (Bill Kenwright Ltd, UK No 1 Tour/Vaudeville Theatre West End) and the role of Kenneth Williams in Round the Horne and Unseen and Uncut (Ian Fricker Productions).

A peerless cast, in a timeless comedy, live on stage. See you there.