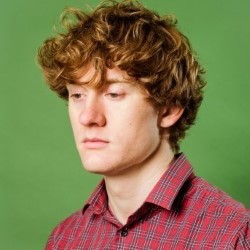 Foster's Edinburgh Comedy Award Best Show Nominee 2012 and 2013. James Acaster has something he's been meaning to tell you. He's been putting it off for some time. You might want to sit down. Expect whimsical rabbiting on and awkward physicality throughout. Seen on Never Mind the Buzzcocks and 8 Out of 10 Cats. Heard on James Acaster's Findings (Radio 4) and The Josh Widdicombe Show (XFM). 'Beautifully constructed "art of stand-up" stuff' (Sunday Times). 'Curious, original and immensely enjoyable' (Telegraph). 'One of the sharpest comic minds to have emerged in recent years' (Guardian).

James has something he's been meaning to tell you. He's been putting it off for some time. You might want to sit down for this.

James actually isn't the stand-up comic you think he is. He's going to reveal that he's an undercover cop and always has been. He's invested too much in his assumed identity of a comedian. It's time to make things right.

James Acaster has made a triumphant return from New Zealand Comedy Festival where Recognise won Best International Show. Returning to the Fringe this year, he will be performing his award winning show in one of Edinburgh's most prestigious rooms; The Pleasance Cabaret Bar. Previous Perrier winners and comedy heavyweights such as Harry Hill, John Bishop, Frank Skinner, Sean Hughes to name a few have performed in this room, which is an astounding leap, playing just 55 seats in 2011 to 175 seats in 2014. Recognise will then go on to tour the UK in the autumn.

James announced himself onto the Edinburgh stage with his critically acclaimed debut sellout show Amongst Other Things gaining five and four star reviews. He then followed this up with two nominations for the main Foster's Edinburgh Comedy Award, with Prompt in 2012 and Lawnmower in 2013. The Sunday Times described his show as "Beautifully constructed 'art of stand-up' stuff...this show will be taught in schools as the perfect how-to example".

Off stage he has his own series James Acaster's Findings for BBC Radio 4 and also regularly features on XFM with Josh Widdicombe.