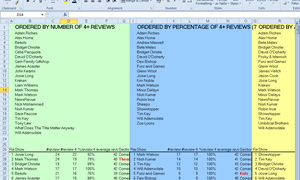 2014 was a bumper year for the Edinburgh Festival Fringe, with well over 1,700 different comedy shows being performed in the city in August. We saw some really great shows this year, as did the reviewers.

86 different publications were at the Festival in August watching comedy, and between them they output over 4,300 reviews about 1,110 different shows.

Now that the awards have all been handed out, the comedians are on well-earned holidays, and some are even turning attention to next year's Fringe, we thought it time to look over those reviews to find this year's best received productions.

In descending order, here are the comedy shows which clocked up more than 10 reviews that were 4 or 5 stars. Click on any title for more information and links to all these reviews.

Multiple award nominee Josie Long had another brilliant year at the Festival if the reviews are anything to go by. Her show - titled Cara Josephine - clocked up 22 glowing reviews. Click the title to read them all.

This year Mark Thomas brought a show to the festival called Cuckooed. In it he told the true story of how Britain's biggest arms manufacturer, BAE Systems, came to spy on a comedian. This show was a star magnet - suggesting you should watch out for it when it comes near you on tour.

When someone wins the Edinburgh Comedy Award it generally heaps too much expectation on their next show, resulting in audiences leaving disappointed. No such problems for Bridget Christie though, with some reviews suggesting this was an even stronger show than last year's award-winning one.

Mark Watson has been away from live comedy for a while, but the reviews for his show Flaws reveals he's lost none of his skill. Of the 17 reviews published about the show, every single one was 4 or 5 stars. Impressive.

Sketch group Beasts were loved by the critics for this year's show, which somehow managing to combine three 'solo shows' into one hour. Metro points out in its review: "the method in this collective madness is pure, unabashed silliness".

James Acaster is becoming well-known for his beautifully written stand-up routines, and has been nominated in the Edinburgh Comedy Awards three years in a row now. The Guardian noted: "As ever with Acaster, the delivery is low-octane, beady, but superbly controlled."

Alex Horne brought a high concept show to the Fringe this year. One reviewer described it as a show that could probably only exist at the Festival. Monsieur Butterfly, which involved the audience making a contraption, was described by the comedian as "stupidly ambitious, logistically problematic, potentially disastrous" in advance of the Festival. It clearly worked out well though!

The programme blurb for Nish Kumar's show says "Depending on your opinion, Nish Kumar is either 'a comedian on the up' (Times) or 'a comedian I've never heard of' (You)". Based on the solid reviews for this show, it looks like he might not be able to use the "you've not heard of me" joke next year.

Trygve Wakenshaw's physical comedy was given five stars by publications including Time Out. The magazine noted "Wakenshaw's physicality is flawless. He's like a human Stretch Armstrong, contorting his rubbery body to adopt each absurd character."

What Does The Title Matter Anyway?

The return of Whose Line Is It Anyway? (sorry, the lawyers point out we mean the entirely un-connected What Does The Title Matter Anyway?) was a triumph. Looking back, with the likes of Greg Proops, Josie Lawrence and Colin Mochrie on stage it was always going to be a treat. We're keeping our fingers crossed for a tour!

John Kearns grabbed all the headlines this year when he won the main award, for Best Show. Scrolling through the reviews suggests the critics broadly agreed with the judges' decision. The fact nearly every major publication checked out Kearns points to the fact that the future is bright for free productions at the Festival.

This satirical sketch show has been a part of the Festival for 35 years now. Normally, when something has been going on for as long as that, complacency creeps in. Not so for the NewsRevue gang though - they picked up lots of top star ratings again this year, showing they're still as sharp as ever.

The List, Time Out, Chortle, The Evening Standard, The Telegraph, The Guardian and The Independent were amongst the publications that wrote nice things about Sara Pascoe Vs History. Head through to our listing to read all these reviews and various interviews.

Adam Riches has recently been showing off his character acting skills on Radio 4. In Adam Of The Riches he once again let the audience meet some of his character creations. Giggle Beats, Edinburgh Is Funny and The Telegraph awarded him five stars for his effort.

Tim Key is now such a draw that he managed to pack out the huge Pleasance One venue for his run at the Fringe. As he has explained in interviews, he did things in reverse this year by bringing a fully developed show to the Festival, rather than using the month to work up a new hour. The press loved it.

Tony Law's lunchtime slot might not be the most user-friendly start time, but 17 reviewers still made the trip to The Stand venue to check out Enter The Tonezone. As with all the acts listed here (and everyone else too), you can find all the reviews by clicking through to the listing.

Just outside this list (with a still impressive 10 reviews of 4 or 5 stars) were Gein's Family Giftshop, Liam Williams, Mr Swallow: The Musical, Celia Pacquola, David O'Doherty and Will Adamsdale. 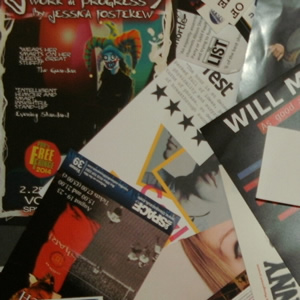 Funz and Gamez, Des Bishop, Minor Delays, Andrew Maxwell and Zoe Lyons were the other acts that were reviewed by multiple publications and had a great percentage of positive reviews.

Of course, having focused so much on the star ratings above, we ought to point out there's an argument that the whole review system is flawed - an opinion that seems to be getting louder each year. Star ratings certainly are very subjective between reviewers, and open to broad interpretation. Chortle is one of the publications now considering dropping stars for 2015, commenting "what better expresses an opinion? Four hundred or so words chosen as carefully as possible to describe and critique a show, or a blunt score out of five?".

It's also worth mentioning that well-known acts are more likely to get reviewers to come and see them, so just because someone isn't on this list doesn't mean their show isn't still brilliant.

Many hours of work have gone into compiling the data to create this page. British Comedy Guide would like to thank comedian and data-analyst Gareth Morinan for his excellent statistical analysis, and Ian Wolf who did a sterling job of scouring the web to locate even the most obscure of mentions. Ian's thoughts

To see all the reviews any comedy show at the 2014 Fringe got, just find its listing on our site: Browse listings