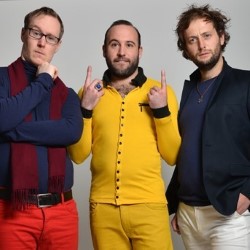 Critically-acclaimed sketch group and stars of their own BBC Radio 4 series, Clever Peter return to Edinburgh. This year they invite you to The Dreams Factory... where imagination is King. (For up-selling please call 07789 022303). 'Breakneck nonsense and hilarity' (Times). 'Terrific... If they don't go very far, soon, there's no such thing as British Justice. Clever? Not half' (Daily Telegraph). 'This goes one step beyond sketch - they make it an art form' (Comedy.co.uk).

Critically-acclaimed sketch group and stars of their own BBC Radio 4 series, Clever Peter invite you to 'The Dreams Factory'... where imagination is King.

Their debut radio series Strap In - It's Clever Peter aired last year on Radio 4 to excellent reviews, and they are behind cult monthly podcast, Clever Peter Unleashed.

They are returning to the Fringe for the first time since 2011 with two shows; brand new show The Dreams Factory, set in the heady world of advertising; and Clever Peter: Free For All, a free show featuring old favourites and brand new sketches on Laughing Horse's Free Festival at City Café, Blair St 4.15pm daily.