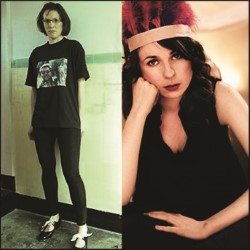 Character comedians Cariad Lloyd and Louise Ford invite you to meet the bizarre and delightful comedy creations living inside their heads.

Louise wrote and starred in the hit Edinburgh show, Jenny Fawcett. She trained at RADA and her TV credits include In the Flesh (BBC Three), Chickens (Sky1), It's Kevin (BBC2) and Misfits (E4).