Meet the new breed of grumpies: a bit younger but no less embittered, with festive humbug and tales of seasonal Tourette's, inappropriate present-buying and the eating of reindeer. 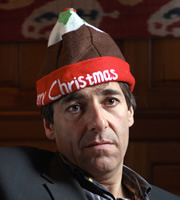 Following the success of the long-running Grumpy Old Men and Grumpy Old Women series, a host of inveterate Grumps of both sexes (and varying ages) vent their collective spleen at the festive season in The Grumpy Guide to Christmas. For those of a disgruntled disposition, Christmas and the accompanying brouhaha cause no end of exasperation, so the irascible cast are on particularly grouchy form as they get stuck into a sackful of seasonal grumbles.

As Mark Radcliffe points out, "There is a great relief if you've got family Christmas over with and no-one's punched each other." In order to avoid familial fisticuffs you'll first have to plough through turkey and cranberry sauce, which according to Ronni Ancona is "basically chicken with jam" served up with Brussels Sprouts "which are the grapes of the devil". Then, of course, there's the exchange of presents - here's Al Murray on the 'joy' of giving: "Oh p*%s off. The joy is the frenzied unwrapping, like a crazed velociraptor tearing its prey apart ... giving sucks." As Christmas becomes more commercialised, perhaps the saddest thing is that "a lot of youngsters don't know the true meaning of Christmas", notes Alistair McGowan. "They genuinely don't know that it's the time we celebrate the birth and the life and the work of Morecambe and Wise". But the definitive Grumpy take on Christmas comes courtesy of Ozzy Osbourne, who actually considers himself lucky to have missed the whole thing one year following a horrific quad bike injury ... "it's not goodwill and peace to all mankind, it's just b*%^#cks."