2011 Specials - The Grumpy Guide To Work

A gaggle of Grumpys to let off steam on the subject of 'Work'. Whether it's looking for work, commuting to work, actually doing the work, surviving your work colleagues or quitting work, every single step of the ladder is fraught with frustration. 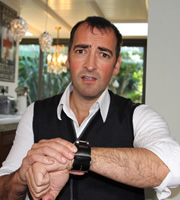 The Grumpy Guide To... returns to BBC2 with a fresh gaggle of Grumpies venting their spleen on the most unpleasant yet inescapable aspect of daily life: work.

Whether it's looking for work, commuting to work, actually doing the work, surviving your work colleagues or quitting work, every single step of the career ladder is fraught with frustration. In this hour-long programme, the Grumpies let rip on the soul-destroying routine of hard graft.

First to the office, a hell-hole of boredom and discontent, where colleagues barely speak unless to berate and humiliate or worse still, flirt with each other. By email. "I don't think there can be anything more soul destroying," says Neil Morrissey.

Corporate culture is one big bugbear, made worse when it demands actual enthusiasm. Alistair McGowan remembers, "This telesales firm insisted that when you had sold something...you had to stand up and go, 'Qualification Alistair!' And everyone was supposed to applaud in the middle of their phone calls. And if you then completed the sale you stand up to say 'Verification Alistair!'" - pretending to be American - "it was the most embarrassing thing I think I've ever had to do."

Whilst the mind-numbing routine of work is no life for a Grumpy, who need an outlet for their frustration, be it inane banter or office crushes. Often rebellion is the only answer, and the Grumpies offer ingenious ways to beat the system. As Katy Brand admits, "I liked finding places to escape, little nooks and crannies... where you could tuck yourself in and not be found... otherwise you just become just a number - you absolutely have to keep a sense of your own autonomy - you have to break the rules."

Even socialising at the grindstone does not lighten the load. Staff bonding away-days and paint-balling sessions are not to be tolerated. Instead, the Grumpies salute the skivers, the time-wasters and the stationery stealers, and stick two fingers up at the boss. Mark Radcliffe gives his version of a working day. "An eight-hour working day ought really, if you're coming in about half nine, you sort of crank up and get started about ten. A bit of a coffee break at 11.15, and then 12.00 you start thinking about lunch - you probably put a good steady couple of hours in the morning. If you got an hour for lunch you probably want to stretch that out a quarter of an hour either side, then in the afternoon you'll get back up to speed at about 2.00...at about 4pm you're thinking 'That'll probably do it.' So four hours in an eight-hour day, I think that's a very fair shift."