2010 Specials - The Grumpy Guide To The Eighties

The 80s, a decade that style forgot, along with any form of taste or decency. From Thatcher's Britain to the New Romantics and the ubiquitous filofax there's much about this decade to be grumpy about. This is a look back at one of history's most embarrassing decades. 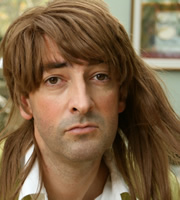 A cross-section of Grumps (old and young...ish) wax irritable about the decade that style, taste and decency forgot. These ten years that saw the rise of rampant consumerism, the Wicked Witch of Westminster, shoulder pads and rubbish hair were a difficult time for those of a disgruntled disposition, so expect their Filofaxes of fury to be positively bulging with caustic memos.

Geoffrey Palmer narrates a show that puts the monkey boot into Roland Rat, the Rubik's Cube, mullets, Cabbage Patch Kids and Agadoo, assisted by an illustrious list of whingers.

The eighties, a decade defined by vacuity, are perhaps best summed up by the dross that passed for pop back then; Al Murray found the lyrics of The Human League "tongue in cheek at least. Whereas you never got the feeling that Duran Duran had a tongue or a cheek. It was just brass neck." Even scarier than the New Romantics was the Leader of the Free World, as Mark Radcliffe recalls: "On Spitting Image, Ronald Reagan was not as funny as the real thing. It just seemed impossible that this had happened." But there was another, more sinister puppet unsettling Fiona Allen: "Stupid, green, pointless, squeaking, irritating pile of furry sh*t", she fondly reminisces, before concluding, "I'd like to have an Orville bonfire party."

There were strange fads too, including CB radios. "It was odd, it was just a lot of children speaking to truck drivers" says Russell Kane. "Now, there'd be an electronic tag on your leg faster than you can say, 'Meet me by the bins, I'm thirty-seven'." Plus, Terry Christian reveals what the acronym 'Yuppie' really stands for: "Young-upwardly-mobile ... whatever. I just thought they were a bunch of tw*ts."