The Grumpy Old Men and Women take a look back 'the best days of your life'. We all remember the sadistic games teacher, or the unique boredom of double maths on a Monday morning, but, for the grumpies, the school day horrors seem to have particular resonance. 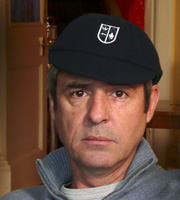 The Grumpy Guide To School Days is a one hour special from the makers of Grumpy Old Men and Grumpy Old Women in which our class cast their curmudgeonly minds back to the-far-from-best days of their lives.

In a show which takes our moaners back to when all that ill-temperedness started, Geoffrey Palmer narrates recollections of total tedium, putrid spotted dick and the art of getting away with murder, ably assisted by a thoroughly ticked-off register of surly students, including: Ronni Ancona, Ed Byrne, Bobby Davro, Russell Kane, Shappi Khorsandi, Alistair McGowan, Neil Morrissey, Al Murray, Mark Radcliffe, Penny Smith and John Thomson.

We all remember the sadistic games teacher, double Maths on a Monday morning and the horror of cogitating Latin verbs. But if you are of the Grumpy persuasion, then school based sufferings strike a particularly petulant resonance...

As Mark Radcliffe recalls, they were a mix of sadism and insanity, with class-based boredom akin to "watching Madonna in Evita". Mark Steel agrees: "the biggest problem was that they made you learn stuff." Things were not any brighter for Ronni Ancona who wonders if 'the best days of your life' fanatics actually "spent the rest of theirs in Russian gulags".

The shared snifflings are bountiful. Ranging from Al Murray's gym-based shame of "being at the back of the queue with the fat boy trying to avoid climbing the rope" to the dinner ladies at Neil Morrissey's school who invented "blamange for cement replacement in the war". But whilst there some goody two shoes like Penny Smith, who thought that "everybody else in the world was having a good time whilst I had to do my homework", there was always one, at the back of the class, causing trouble. Such as teenage tearaway Shappi Khorsandi, "who stole Neil Kinnock's daughter's school report with the intention of selling it".

So whilst schooldays were defined by ritual humiliation, stolen schoolbags and relentless regimentation - as Grumpy Guide To School Days demonstrates - the lessons also equipped us for a life of jumping over ropes, fleeing an angry mob and practicing the invaluable skill of looking interested, when in truth, you were bored out of your tree.