Life in Craiglang is getting pensioners Jack and Victor down, until they discover an endless supply of free whisky. Meanwhile, all bets are off when Winston runs into an old enemy at the bookies. 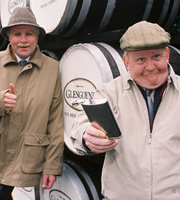 When Winston passes by the re-opening of the Bookies, he spots Stevie the bookie who had run away without paying out £32,500 owed to him. Stevie insists that he is his bald brother, Frankie.

Winston and Tam hide out in the Bookie's toilet all night to see Stevie come in during the morning and start shaving his head. Stevie admits to trying to fake his identity and pays out the £32,500 to Winston. Winston stuffs the money into his artificial leg, but when he is at home talking to Jack and Victor, his leg flies off and crashes through the window. It lands on the ground, and a hoodie runs off with it.