Jack and Victor decide to visit Winston in his new home at the seaside town of Finport - but find the local people are even stranger than those in Craiglang. Tam falls in love with his ex-sister-in-law who is a former variety star even more careful with her money than he is! 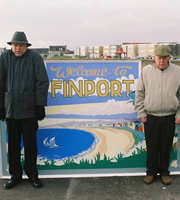 Frances's sister Molly arrives from Finport to stay with Tam and Frances for a few days. Tam is completely enraptured by Molly's good looks and also because she is as tight fisted as he is.

Meanwhile Winston has sent about 6 postcards from Finport, which makes Jack and Victor think that he must be missing them all in Craiglang. They decide to pay him a visit. In Finport Jack and Victor stay overnight in a bed and breakfast and also they discover that Finport is full of weird people and becomes a bit wild at night time.

When Jack and Victor catch up with Winston, he shows them how he spends his time during the day - by going to the amusement arcade, paddling in the sea, eating fish and chips... and not much more than that. Winston shows Jack and Victor his accommodation which is pretty grim too.

Jack and Victor persuade Winston to come with them back to Craiglang. Meanwhile Molly goes back home to Finport and gives Tam's balls a wee squeeze at the bus station!