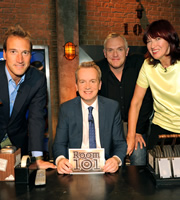 - Greg: Interviews with members of the public - Into Room 101.

- Greg: An old man in a village in Spain who appears to hate Greg.

- Janet: Supermarkets that offer to pack your bags.

- Greg: Shops that have escalators up but only stairs down - Into Room 101.

Greg Davies on the general public on TV

Greg Davies tells us why some members of the public shouldn't be on TV.