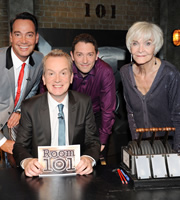 - Sheila: People who give her scented candles.

- Jon: All of his friends who have settled down.

- Craig: People who tell jokes all the time.