One half of Mel & Sue, one half of Punt & Dennis, and all of Cilla Black try to cast parent and toddler fun groups, Las Vegas and knickers into Room 101.
Preview clip 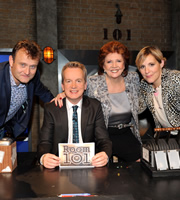 - Mel: People who tell you about their dreams.

Sue Perkins was originally scheduled to appear, instead of Mel Giedroyc.

Cilla Black discusses 'Do you know who I am?'

Cilla Black discuss why people who say "Do you know who I am?" should go into Room 101.