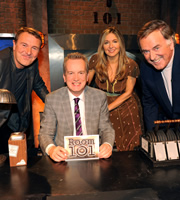 - Phil: People whose voices go up at the end of a sentence.

Phil Tufnell takes on his worst enemy - the Australian Cricket Team from 1990 to 2002.