ITV has ordered a new comedy drama series based around a 1980s themed bed and breakfast guesthouse in Margate.

Edge Of Heaven has been created by Robert Evans, a writer and occasional actor whose credits include Stella and The Green Green Grass, and also created CBBC sitcom hit Sadie J.

The series, which will consist of six hour long episodes, will begin filming in August and focuses on the Taylor-Chatterjee family who own the guesthouse. The series is based on an idea Evans created with Sadie J producer Paul McKenzie, who will also produce Edge Of Heaven, alongside Elaine Cameron.

Camille Coduri (Him & Her, Nuns On The Run, Doctor Who) will star as wife Judy, with Nitin Kundra (Celebrity Juice's Indian Keith) playing husband Tandeep, newcomers to the seaside resort of Margate.

Blake Harrison (The Inbetweeners) and comedian Laura Checkley play Judy's children from a previous relationship, Alfie and former soldier Ann-Marie. Alfie is a man with his life and future in Margate all planned out ahead of him, until his fiancée Carly (Justine Michelle Cain from Some Girls) leaves him at the altar. There's also Michelle (Louisa Lytton), Carly's best mate who's always had a soft spot for Alfie.

Marcia Warren, most recently seen in the ITV studio sitcom Vicious, will play Nanny Mo, whilst the family's uncles will be played by writer Robert Evans and Adrian Scarborough.

Elaine Bedell and Myfanwy Moore, ITV's comedy commissioner, ordered the series, which is being produced by Hartswood Films, the company behind comedies including Coupling, Men Behaving Badly, and most recently, Me And Mrs Jones, plus BBC One drama hit Sherlock.

Myfanwy Moore says: "We're delighted to be able to book into the Edge of Heaven B&B alongside such a great ensemble cast of larger than life characters. We hope their lives and loves will win them a place in our viewers' hearts."

John Henderson (Benidorm, How Do You Want Me?, Spy) and Sandy Johnson (Stella, Jonathan Creek, Benidorm) will direct the series.

Beryl Vertue, who is acting as Executive Producer, says: "It is very good news that ITV have started to commission scripted comedy again, and we'll try and give them a big hit with Edge Of Heaven. This is Robert Evans' first original comedy series, and his hilarious scripts have attracted a great cast".

Filming is scheduled to begin in Margate in August. It is likely to be on screens in 2014. 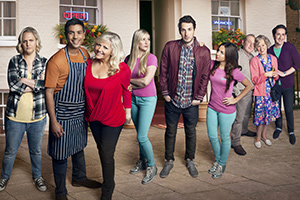