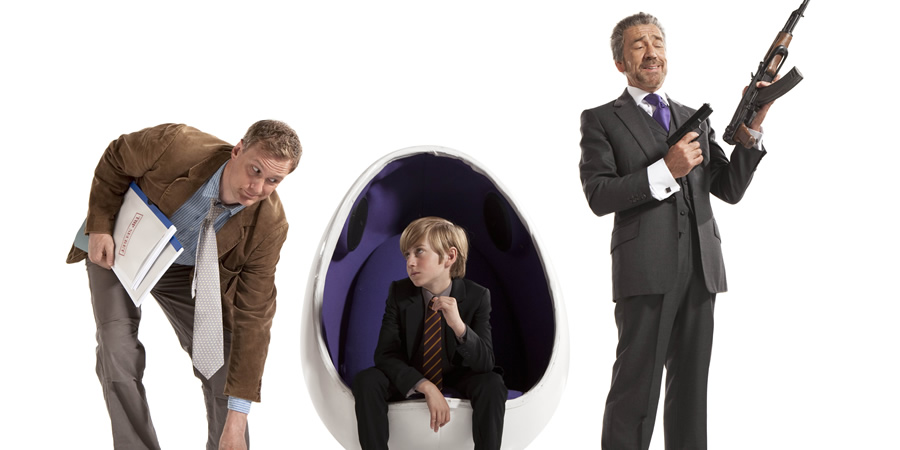 Spy is the story of Tim, a single father trying to win back the respect and affections of his horribly precocious nine year old son, Marcus. In the hope of proving that he is not a complete loser, Tim quits his dead-end job but his life changes forever when he is accidentally recruited as a trainee spy for MI5.

Supervising Tim at work is irrepressible MI5 boss, The Examiner, who teaches the recruits his own unorthodox approach to the espionage game.
Adding to the chaos of Tim's life are his acidic ex-wife, Judith, her enthusiastic new boyfriend Philip and his anti-social friend Chris.

And romance may be on the cards for Tim in the form of fellow spy Caitlin provided she can let her guard down long enough, or perhaps if he's really unlucky he may fall into the web of psychopathic obsessive social worker, Paula.

Series 2: Our leading man is still reeling from the revelation that Caitlin's presumed-dead fiancé Agent Marion Portis is very much alive, and, lathering salt into the wound, the slick American is now working at MI5. Can Tim work his magic and win Caitlin back? Anything's possible if he's still got that see-through, nipple-baring shirt handy.

Marcus has a rival too in the form of a thunder-stealing new boy Nick, with his sights set on Justine. Father and son are getting along better, though, with the latter progressing from borderline hatred to playful indifference. Confidential documents also reveal that we'll be seeing a lot more of The Examiner and Tim's best bud Chris.