Series 31, Episode 1 - Behind Every Bush There Is Not Necessarily A Howard

Hobbo enlists the services of his 'team' to help Toby win back the affections of his ex-wife. 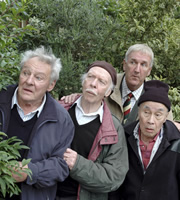 Glenda decides to make it her mission to find Morton a woman. Howard sneaks into the library to tell Marina there's a problem with their bike ride that afternoon - Pearl is going out too. Meanwhile, PCs Cooper and Walsh try out a new in-car fryer.

A Countryfile special follows this episode at 8pm on BBC1. For thirty-seven years, Holmfirth has provided the backdrop to BBC favourite Last of the Summer Wine. Now, with the show in its final series, Adam Henson and Ellie Harrison look at the influence the sitcom has had on the town, and speak to some of comedy's stars.