Series 30, Episode 9 - Variations On A Theme Of Father's Day

In order that Hobbo can find out more about Nelly, his supposed mother, he has Howard eavesdrop on her when she is visiting Pearl. 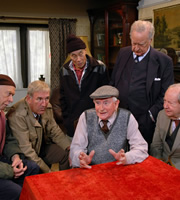 Soon realising what Howard is up to, the women plant a completely false story about Hobbo's father being a hippy. Hobbo loses no time in making himself look exactly like the description of his father, complete with earrings and beads. Unfortunately, by the time the women see the fruits of their imagination, Hobbo is being arrested.

Due to a technical fault at the BBC, at the time of its original broadcast this episode's picture was interrupted 4 minutes in, with the closing credits playing (whilst the soundtrack stayed correct). An apology was issued at the end of the episode proper.