Series 30, Episode 4 - Who's That Looking Sideways At Nelly?

Hobbo, former milkman and undercover agent at Primrose Dairies, is ready for any dangerous situation - and going round telling everyone that Nelly is his mother is one. 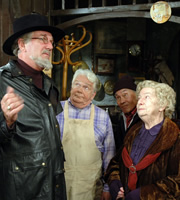 Another danger arises when he demonstrates his gift of disguise, and finds himself the new recipient of Marina's affections. Hobbo then discovers the danger of exercising when his neck locks solid while doing some simple head movements. Not only is this dangerous, but highly hazardous when trying to sip a pint of beer sideways.