Harry Enfield and Paul Whitehouse are back with a whole new range of characters in a new series of their sketch show.
Preview clip 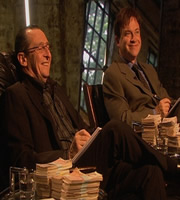 The Chocolatier - Picking up a WAG on a horse

Charles and Sheridan - A Foo Fighter

Pik The South African - Chatting Up A Girl

Clive The Geordie - Hassling A Postman

Sunset Rest Hotel - Children's Books (The Writer And The Landlady)

I Saw You Coming - Old Lamp

Clarence and Henry - Pimping The Yaris

This episode was dedicated to producer Geoffrey Perkins. As a result of the tribute aired at the end of the show replaced the credits and thus it has not been possible to record the full cast and crew list yet.

Beware of the Northener

Mr Lovelock has a rather odd pet.