Gillian and Gerald take us on a tour of The Royal Henley Northerner Show 2008, while Nelson Mandela has an encounter with Margaret Thatcher. Also, Simon continues his efforts to charm Magda in Cafe Polski - will he finally get the girl?
Preview clip 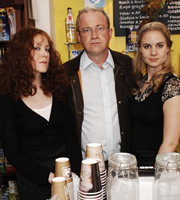 Dragon's Den - Crown and other inventions

I Saw You Coming - Blonds of a Certain Age

The Polish Coffee Shop - Simon gets the girl, but then her even more attractive sister walks in

Blonds Of A Certain Age