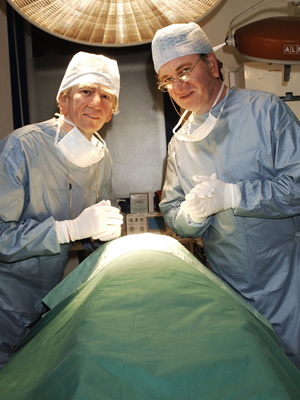 Here is a guide to the regular characters who appeared in both Ruddy Hell! It's Harry and Paul and the follow-up series, Harry and Paul:

Nelson Mandela: the former President as you've never seen him before. Shoplifting, pushing drugs and murder are just three of Mandela's many hobbies.

I Saw You Coming: A very rude antiques salesman who owns a shop in Notting Hill. He exploits the gullibile and wealthy women who visit his shop.

Posh Builders: Darren and Kev are two well annunciated scaffolders who talk about high-brow arts subjects... until they see a passer-by, at which point they revert into stereotypical builders who hurl sexist obscenities at their victims below.

The Polish Coffee Shop: Simon, a middle-aged man visits a coffee shop staffed by two Polish girls. He exchanges awkward conversation with them as they prepare his coffee. He clearly fancies Magda, but she is not interested.

Pik The South African: A gormless ex-rugby player who hangs out in gyms. He talks to the camera about his last night out - normally imparting too much information in the process.

The Chocolatier: A caped man who uses chocolate to render women powerless to his advances. His enemy is a shoe cobbler who uses footwear as his persuasion tool.

Clive the Geordie: A posh family who keep a 'pet northerner' called Clive.

Amused Television Couple: An Italian gentleman and his wife who find British TV comedy highly amusing. They describe classic scenes in detail as they are played out on their TV.

Dragons' Den: A series of sketches through which Harry and Paul spoofed the business reality TV show.

Clarence and Henry: Two elderly Radio 3 DJs who are obsessed with rap music.

Cultured Fisherman: A man who tries to strike up a cultured conversation with his fishing friend. He pretends he doesn't know anything about theatre, chess and other high-brow subjects he is trying to start a conversation about, when actually he is very passionate and knowledgeable about his interests.

The Efficient Builders: Want a mansion built in an afternoon? Or an extension to the tube so there is a station outside your house? It's not a problem for this dad and son team. They don't even charge for their time or labour!

Movie Originals: Classic Hollywood films taken back to the first half of the century.

Multilingual Football Manager: A football manager who talks to his players in all their native languages.

Sunset Rest Hotel: A black-and-white series of sketches in which a landlady is asked by a dapper gentleman whether she has heard of the products he has created. There is a lot of curiosity as to what this series is sketches is spoofing. To answer the questions, director Sandy Johnson wrote in the Radio Times: It's not actually spoofing anything in particular, although it is meant to have a 1940s/50s, noir-ish feel. The hotel is supposed to be in Brighton, so perhaps there's a Brighton Rock influence.

These characters were retired after Ruddy Hell!. They did not feature in the new second series:

Bono and The Edge: The U2 bandmates chat in their flat.

Bill Gates and Steve Jobs: The computer millionaires are unaware their wives are having affairs. Instead the Apple and Microsoft bosses are too busy turning each other on by talking about technology.

Madonna and Guy Ritchie: A series of sketches in which the famous couple attempt to master living a civilised, upper-class life. They fail and end up swearing and arguing.

Jasper Hazelnut: A thinly-disguised impression of Hugh Fearnley-Whittingstall. Jasper is broke, has lost his wife and is about to have his house knocked down, but he hasn't noticed because he is too busy cooking.

Jose Arrogantio and Didier Peskovitch: A parody of football manager José Mourinho and Chelsea player Didier Drogba. Arrogantio is too busy defending his player's latest alleged offense to notice that Peskovitch is actually misbehaving on the pitch.

Roman Abramovich: The chairman of Chelsea FC is so rich he can, and does, buy everything he wants.

The Paranoid Chavs: Poor old Ashley is trying to relax, but his spoilt pregrant wife and her dad are too scared of germs, bacteria and dust mice (dust mites) to allow him any rest.

Can't Back Down Man: A man who is un-able to back-down from an argument.