This episode features a 1930s' version of Basic Instinct and Tony Blair starting a new job in the City.
Preview clip 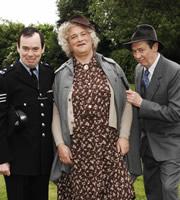 The Chocolatier - The Cobbler

The Posh Builders - The Oscars

Charles and Sheridan - Boggle and Sudoku

Yeah, we can do that!

The efficient son and dad builder team just need a bit of four by two by four by two to extend the underground.