Beverly and Carol are forced to hide their friendship from an increasingly jealous Helen. Matt is caught between a financial rock and hard place: either sell the beach house or take a job as a game show host.
Preview clip 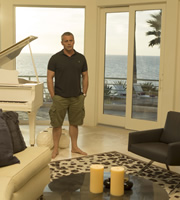 Helen continues to be threatened by Carol's relationship with Beverly.

She's convinced that Beverly holds a candle for her girlfriend, forcing Carol and Beverly to keep their friendship under wraps.

Matt is still furious at Sean and Beverly for reneging on their offer to let him star in their new show. He refuses to speak with either of them, and it seems the rift may be irrevocable.

Plagued by financial woes, Matt considers selling his house in Malibu - but the potential buyer turns out to be one of the last people on earth he would want to sell it to. The only other option on the table? Taking a job hosting a game show produced by his nemesis Merc Lapidus.

Bad time for a selfie

Matt LeBlanc meets with his agent about a new project, until they are interrupted by some fans...