Matt learns that his financial situation is even more dire than he thought. To make matters worse, his ex-wife's upcoming marriage - which would save him millions in alimony - is suddenly on shaky ground.
Preview clip 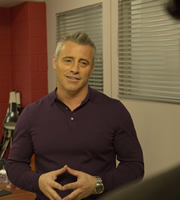 Desperate for work after he learns that his financial situation is even more dire than he thought, Matt persuades Sean and Beverly to try and convince their nemesis Andrew Lesley that Pucks! is truly dead and Matt is available to do his new NBC show.

Meanwhile, Beverly is still reluctant to do another TV show in the States. But Sean is insistent. He doesn't want to walk away from the money. The compromise: if they can find one network that seems like it won't destroy their vision, they'll move forward. Otherwise, the script goes back in the drawer.

Over at the network, Carol is forced to sit down with her new boss Helen Basch. The elephant in the room: Carol once had an affair with Helen's husband and broke up her marriage. Yeah, it's a big elephant.

Matt and his new Business Managers discuss his ailing finances.