Beverly and Carol struggle to hide their friendship from Helen. It's show time for Matt and The Box!
Preview clip 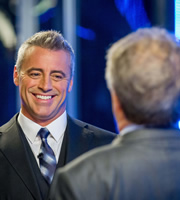 Carol and Beverly take drastic measures to hide their friendship from an ever-suspicious Helen.
As Beverly tells Carol: "Life was much easier before you became a lesbian!"

With Helen out of town on business there seems to be a window for them to enjoy each other's company, without looking over their shoulders. However, an ill-fated hike puts both Carol's career and Sean and Beverly's show in serious jeopardy.

Meanwhile, it's lights, camera, action, as the shoot day for The Box arrives. Matt unenthusiastically takes centre stage in the role of gameshow host.

Tensions remain high between Matt and the show's producer Merc Lapidus. The two enemies continue to push each other's buttons, with a final push bringing down the house - and an awful lot more.

Sean points out the irony in Matt having to host a quiz show, Matt fails to see things the same way.