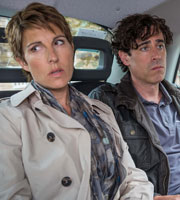 Sean and Beverly's Hollywood career refuses to die as they are dragged back from London to make six more episodes of Pucks! Matt gets some very disturbing news about his finances, while Carol once again lobbies to run the network.
Preview clips

Matt and his agent attend his former accountant's funeral. There's a poor turn out and Matt is about to find out why.