The series comes to a close, and there's a shock in store for Rachel and Cuckoo. Ken, however, sees a big opportunity opening up.
Preview clip 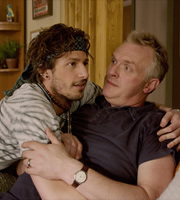 Rachel and Cuckoo discover that their nude Thai ceremony on the beach wasn't quite as official as they thought. In fact, they are not legally married.

Lorna's delighted she's finally going to see her Rach get married - but Ken realises this might be his one opportunity to get rid of nitwit Cuckoo once and for all...

Steve sets a bunch of rules for Cuckoo's stag do.