Ken has his eye on becoming a local Lib Dem councillor, but Dylan getting into a fight at school sets his ambitions awry. Lorna intends that Cuckoo and Ken do a little bonding.
Preview clips 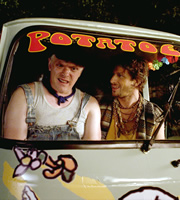 Ken is over the moon when he's been picked to become a Lib Dem Councillor. Cuckoo is full of advice; politics is, after all, his special subject.

Ken is devastated when Dylan kicks a guy in the nads and unwittingly ruins everything. Can wise Cuckoo pull Ken out of his hole and get him his dream back? Nope.

Erroneously, Tyger Drew-Honey was not credited in this episode.

A preview of the third episode of the sitcom.

While under the influence, Ken and Cuckoo take over the DJ duties at a party.