Ken struggles to find something to like about his new son-in-law before being pushed into a somewhat radical course of action.
Preview clips 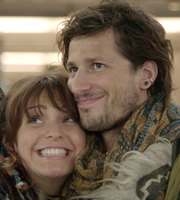 At an airport in the Midlands, Suburban parents Ken and Lorna eagerly await the return of their only daughter, Rachel from her gap year. Rachel however, has brought back an unexpected souvenir and surprises her doting parents by introducing her new husband, Cuckoo.

A travelling hippie and every parent's worst nightmare, Cuckoo considers himself a spiritual teacher and visionary who, much to Ken's indignation, vows he would never take payment for his services and therefore has no income to support his new wife.

Cuckoo wastes no time making himself at home and it's not long before he is sharing his new age ideas at the dinner table, and pushing Ken's patience to the limit.

In a last attempt to bond with his new son-in-law, Ken takes Cuckoo out for a drive for some man-to-man time but the day doesn't go quite to plan and Ken, exasperated by the idea of his perfect daughter jeopardising her future for this vapid freeloader, is pushed into a somewhat radical course of action.

Cuckoo recites his wedding speech about Rachel to her whole family. Ken, Lorna, Dylan and Rachel all listen on as Cuckoo describes how he feels about Rachel, much to her Dad's discomfort.

Ken is planning a day out bonding with Cuckoo.