Alfie decides that he can't go on teaching without his beloved class and quits Abbey Grove.
Preview clips 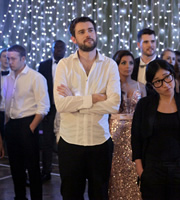 With exams over, it's careers advice day for Form K. But it's Alfie who takes the biggest decision, when he decides that he can't go on teaching without his beloved class and quits Abbey Grove.

Fraser is gutted to lose his best friend and takes the news very badly. Alfie reveals he has landed himself a job at the Playstation factory and cannot be tempted back, despite Ms Gulliver and his class begging him to return. But will the truth about Alfie's new job be exposed?

And will they manage to convince him to return to Abbey Grove? And who will be crowned Prom King and Queen?

Fraser decides to hide in the school leaver's photos.

You are destined to become...

Alfie's class are given the results of their careers aptitude test.