Martin Wickers's attempts to teach Alfie to drive end in disaster when they run over the school caretaker.
Preview clips 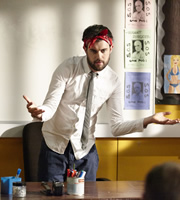 Alfie and his class start fundraising to raise money for the caretaker's urgent surgery, after Alfie ran him over. But when the school bully Grayson is transferred to Alfie's class, it soon becomes clear that their noble intentions might be difficult with him around.

Soon Alfie and his class find themselves no longer leading a charitable enterprise but being taken on a joyride in a stolen ambulance. Meanwhile, Fraser has taken up pole dancing and sees the fundraiser as the perfect opportunity to demonstrate his skills.

The first rule of Pole Club

Fraser has a new hobby, but the rest of the staff are not too sure about it.

Alfie tries to connect with Frank with the help of Coolio.