Mitchell announces he's leaving, and a farewell party is on the cards - plus a few pranks. Alfie's more concerned with impressing Miss Gulliver's new book club, of which her ex boyfriend is a member.
Preview clips 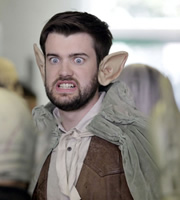 Mitchell announces he is leaving Abbey Grove, creating the perfect opportunity for a farewell party. Luckily Fraser is renting out rooms to after-school clubs for extra cash.

But things get complicated for Alfie when he promises to attend Gulliver's book group, Fraser's LARPing club and Mitchell's leaving party.

Alfie wants to use the book group as an opportunity to impress Gulliver - but when he gets his class to write his chapter summaries, things quickly go from bad to worse.

Simultaneously he has also got to help Fraser win a fantasy battle against two very self-important LARPers and survive Mitchell's leaving pranks. Will he be able to do all three without letting someone down?

Alfie Wickers is up to his usual.

The class say their emotional farewell to Mitchell.

Alfie is in for a shock when he joins Miss Gulliver's special book group.