The summer term has started, and Fraser's got the school into dire financial straits. Things are so bad he's got to sack a member of staff, but Miss Gulliver is not going to let it happen without a fight.
Preview clips 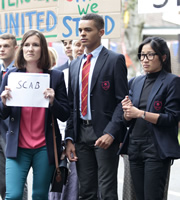 It's summer term and Alfie Wickers is back in high spirits to get his class through their exams. But there is a shock for Alfie with the revelation that his dad Martin Wickers has been appointed as the new deputy head whose first jobs are to increase class sizes and fire a member of staff after Fraser has badly invested the school's money in his own clothing range, Dolce and GaBanter.

For Alfie this means a new class member, Cleopatra, and a tough decision to make - stand by his girlfriend, Miss Gulliver when she leads the teachers on strike, or sacrifice himself to save his class from failing their exams.

Alfie finds an unusual way to control his classroom.

The stupidest kids in Britain

A newspaper interview gives Alfie an insight into how much his students actually know.