Abbey Grove is rocked by the death of one of their staff.
Preview clip 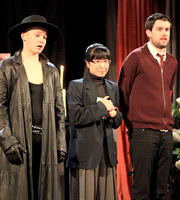 Abbey Grove is rocked by the news that deputy headmistress Miss Pickwell is dead, and Alfie is left particularly on edge when her suicide note clearly lays the finger of blame on him after one of his class's pranks pushes her over the edge.

Haunted by guilt, will Alfie be able to put her un-quiet spirit at rest with the perfect memorial service?

With Pickwell gone, headmaster Mr Fraser decides to advertise for her position with less-than-successful results, which may mean Miss Gulliver is offered the role full-time. But will the power change her?

Alfie and his class play a prank on Miss Pickwell... with a sticky end.