Banned from organising his own trip after a disastrous previous outing, Alfie's class are sent on Miss Gulliver's field trip to a combined petting zoo and ink museum.
Preview clip 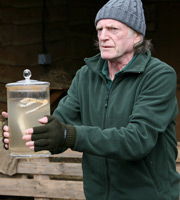 It is the day of the Abbey Grove school field trips and Alfie and Gulliver are escorting their pupils to a petting zoo and ink museum.

Fraser takes his group of pupils to a 'poetry recital' which turns out to be a rap battle, and Pickwell decides to take her class to an abattoir.

Alfie's pretty upset to learn Miss Gulliver has a blind date later that day, but things get even worse when the bus gets lost in the woods. Things go from bad to worse, when Alfie takes this opportunity to turn things into a Bear Grylls-esque survival course.

Alfie's class is greeted by the owner of the Ink Museum and Petting Zoo, who tells everyone there's a worm epidemic.