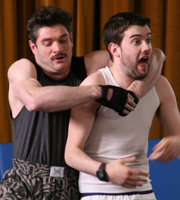 A new computer game craze hits Abbey Grove School that has got the children imitating a dangerous move called the 'blitz kick'.

Fraser decides to buy a copy of the game to see what all the fuss is about but inadvertently turns his staff into addicts as well.

Alfie decides to support his beloved Miss Gulliver in taking a stand against all this violence by organising a weapons amnesty. While Fraser hires a very inappropriate self-defence tutor, Preet, to help demonstrate the dangers of violence.

Get Him in his Yam Yams

Preet demonstrates self-defence techniques to the class much to Alfie's horror and pain.