Alfie becomes embroiled in a web of horror when an exercise in parental appeasement goes disastrously wrong. It's not long before he finds himself leading a sex education class in front of students, parents, angry Mumsnet users, and a couple of foreign exchange students...
Preview clip 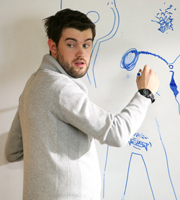 Abbey Grove School parents are worried about the impending arrival of the French exchange students, after Jean Claude and his French classmates ran riot leaving a wake of lovestruck teenagers behind them the previous year.

This year, Fraser is determined to prove to the angry parents that he has got everything under control, especially with his right-hand man Alfie by his side. But is Alfie really the right man to entrust with a sex education class?

Grayson catches Alfie and Joe leaving the girls' toilet together and blackmail ensues over a compromising photo.