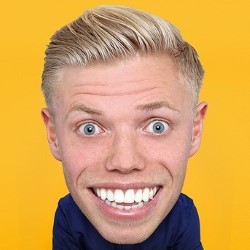 Beckett's back with a brand new hour of funnies and he's taking on the big issues like Kit Kats and flatbread! Star of BBC One's Live at the Apollo, BBC Two's Mock the Week, Channel 4's 8 Out of 10 Cats & ITV2's I'm A Celebrity Get Me Out of Here Now. '...a revelation' **** (Scotsman). 'Relentlessly smiley, perpetually grinning Londoner whose unshowy, unpretentious but thoroughly funny shtick has every chance of winning him a big audience...' (Guardian).

Beckett's back with a brand-new hour of funnies and he's taking on the big issues like Kit Kats and flatbread!

After quickly establishing himself on the circuit Rob's cheeky chappy persona saw him winning fans starring on BBC1's Live At The Apollo, ITV1's Sunday Night At The Palladium, Would I Lie To You on BBC1, Channel 4's 8 Out Of 10 Cats, BBC2's Mock The Week, ITV2's Celebrity Juice, Drunk History on Comedy Central plus the recently aired Play To The Whistle on ITV1. For the past three years he has also been the resident comedian in the jungle each year on I'm A Celebrity Get Me Out Of Here Now! on ITV2.

Rob also hosts a weekly afternoon show on Absolute Radio. The Rock 'N' Roll Football show airs every Sunday between 2 and 6pm. Outside the realms of stand-up Rob is also an actor having recently starred in Channel 4's Fresh Meat.

Following the Edinburgh Fringe, Rob will be taking Mouth Of The South on tour throughout the UK until December. Visit www.robbeckettcomedy.com for tour dates.