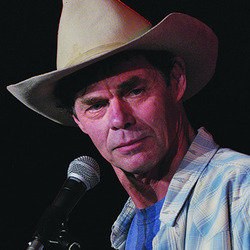 'If a man does not keep pace with his companions, perhaps it is because he hears a different drummer' (Henry David Thoreau). Join Rich and his pals for this acclaimed late night comedy/music extravaganza. Featuring a new drummer. 'Immaculate wordplay imbued with a genuine passion for the songwriter's craft' (Times).

2013 Barry Award winner, Rich Hall returns to the Fringe this year with not one, but two new shows. Rich Hall becomes immeasurably funnier if you try not to laugh at him, because every time you do, a soul somewhere gets trampled. Brand new stand-up show from Montana's deadpan comedy phenomenon (Assembly George Square, Palazzo Spiegeltent, 9:30pm.)

You can also join Rich and his pals for the riotous return of his acclaimed late night comedy/music extravaganza in Rich Hall's Hoedown (Assembly George Square, Palazzo Spiegeltent, 11pm.)

As a regular on BBC One's Live At The Apollo and BBC Two's QI, Rich Hall's renowned grouchy, deadpan style has established him as a master of absurdist irony and king of rapid-fire wit. Rich has also written and presented four critically acclaimed BBC Four documentaries - Rich Hall's Inventing The Indian, Rich Hall's Continental Drifters, Rich Hall's The Dirty South, How The West Was Lost plus the recently screened documentary Rich Hall's You can go to hell, I'm going to Texas.

Since appearing in the guise of his redneck alter-ego Otis Lee Crenshaw in 1998, award-winning Rich has won critical acclaim across the Globe by performing to sell-out audiences on countless UK tours, the Edinburgh Fringe and comedy festivals worldwide. He recently was awarded the Australia's top comedy accolade as 2013 winner of the prestigious Barry Award for his shows at the Melbourne Comedy Festival.

Other television appearances include Stand Up for the Week, Channel 4's Comedy Gala Live At The O2, Have I Got News For You (BBC One), Rich Hall's Cattle Drive (BBC Four), Rich Hall's Gone Fishing (BBC Four), Otis Lee Crenshaw - London Not Tennessee (BBC Two) and Never Mind The Buzzcocks (BBC Two).

Rich's brand new CD Waitin' on a Grammy is available to buy on CD and download now from http://store.offthekerb.co.uk. The CD will also be available to purchase during the Fringe at the Spiegeltent after his two shows.