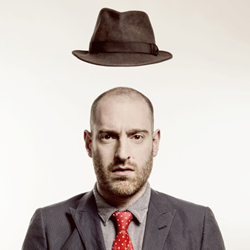 Henry Paker has appeared on Russell Howard's Good News (BBC3), Seann Walsh World and Edinburgh and Beyond (Comedy Central). He won the Leicester Comedian of the Year award in 2008 and writes for Mock the Week, 8 Out of 10 Cats and Stand Up for the Week. Soon to be appearing in sketch show Small Scenes (BBC Radio 4), 'Paker scales impressive comedy peaks' (Guardian). '...has the audience rolling in the aisles for the vast majority of an action-packed hour. Paker is a riotous, iconoclastic star in the making' (Fest). **** (Guardian, List, Fest, ThreeWeeks).

Since his last Edinburgh show in 2011, Henry has gained a fiancée, a flat and a cat. These new experiences form the jumping off point for an hour of loose, silly stand up which incorporate Henry's struggles with online shopping, DVD box sets, cushions and the age old question of how to correctly slice Cathedral City Cheddar.

Henry has established himself as one of the finest stand-ups on the circuit, and returns to the Fringe on the back of two critically acclaimed runs in 2010 and 2011. He made his comedy debut in 2007 and a year later won the coveted Leicester Mercury Comedian of the Year title, following in the footsteps of Johnny Vegas, Josh Widdicombe and Jason Manford.

His debut show at the Edinburgh Fringe, 3D Bugle, was described as "originally-observed, brilliantly-paced" (Spoonfed), and his follow up, Cabin Fever, hit "impressive comedy peaks" (The Guardian), with the latter enjoying a sell-out run at the Pleasance.

Henry is also a much sought after writer with credits including Stand Up for the Week (Channel 4), Mock the Week (BBC Two), 8 Out of 10 Cats (Channel 4), Seann Walsh World (Comedy Central), Newsjack, Small Scenes, (both BBC Radio 4) and Steve Coogan's 101 Really Bad Ideas (BBC Comedy Online).

He has also written and illustrated a host of acclaimed cartoon books with Dave Skinner, including Don't Arm Wrestle a Pirate and Why Steve Was Late: 101 Exceptional Excuses for Terrible Timekeeping. Henry has had cartoons published in The Times, The Observer, The Spectator and Prospect.